‘After Donatello’ – a gem at the Sir John Soane Museum 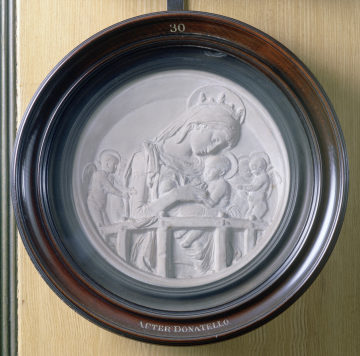 Recently I had a wonderful visit to the Sir John Soane Museum with a group of American museum patrons and volunteers.

The Soane is just one of London’s eclectic, interesting, intimate and off-the-beaten-track museums and well worth a visit.

Sir John Soane was one of the nation’s most accomplished Regency architects who was responsible for many buildings in London including Dulwich Picture Gallery and The Bank of England.

The son of a brick layer he rose to great heights and even went on the Grand Tour amassing a vast collection of art, architecture, decorative arts and paintings.

The museum is housed in Sir John Soane’s private home on Lincoln Inn’s Fields and by act of parliament was gifted to the nation in 1833.  It is as if you are walking back in time when you go through the front door.

As the museum gets ready for it’s Autumn exhibition focusing on the works of William Hogarth, bringing together for the first time all of his series works (see my next blog) I was struck by just how fulsome and of it’s time the permanent collection is.

Amongst the Sarcophagus of Egyptian Pharoh Seti I, the extensive paintings and drawings collections and the many images of Napoleon (a person of great interest for Soane)  I came across a beautiful little plaster cast roundel which says ‘After Donatello’ on the base of the frame: 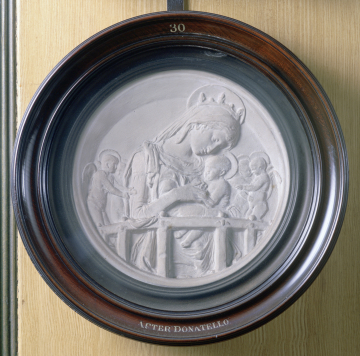 It brought to mind some research I had done on the actual bronze roundel by Donatello which is housed in the Victoria & Albert Museum many years ago when I was a young assistant curator in the sculpture department. 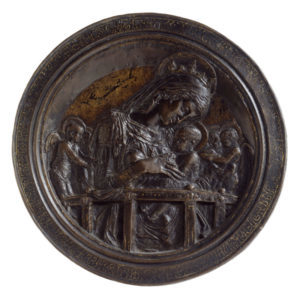 The roundel is datable to about 1456 as a record of it appears in the daybook of the Florentine physician Giovanni Chellini for whom it was made (his bust is also in the Victoria & Albert Museum Renaissance Galleries).  Donatello, who is considered the finest early Renaissance sculptor, was at the height of his fame when he made this, making it a very valuable gift indeed!

It describes the bronze roundel in clear detail as well as the unique aspect of it, that once turned over it is hollowed out on the reverse side so molten glass can be cast into it. A thing of beauty indeed.

We know that the roundel passed through the hands of Chellini’s descendants and then into the possession of the Earls Fitzwilliam whilst on the Grand Tour, but its whereabouts fell into mystery around the 1950s.  That is until one day in 1966 the roundel was brought into the V&A on an Opinions Day, a day which was very good fun in the department as members of the public can bring their objects into the museum for a professional opinion on their authenticity.

This is how the so called Chellini Madonna first surfaced.    It later came to the attention of the former Director of the V&A, John Pope-Hennessy, in 1975 when, leaving a dinner party at the American Embassy, he

‘ran into David Carritt [the art dealer], who told me that he had found a circular 15th-century bronze relief in use as an ashtray. I asked him to let me see it, and he brought it round the following day. Its front face corresponded with that of the other reliefs. But what mattered was the reverse, and when I turned it over I found the mould described by Chellini.’

Pope-Hennessy knew about the existence of the roundel from the said plaster cast in the Sir John Soane Museum but putting the two together must have been a total thrill.  See if you can find it next time you’re in the museum – it’s well worth it.

For a full essay on the object read this article by Charles Avery, former director of the Sculpture Department at the V&A 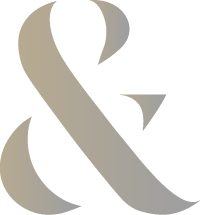